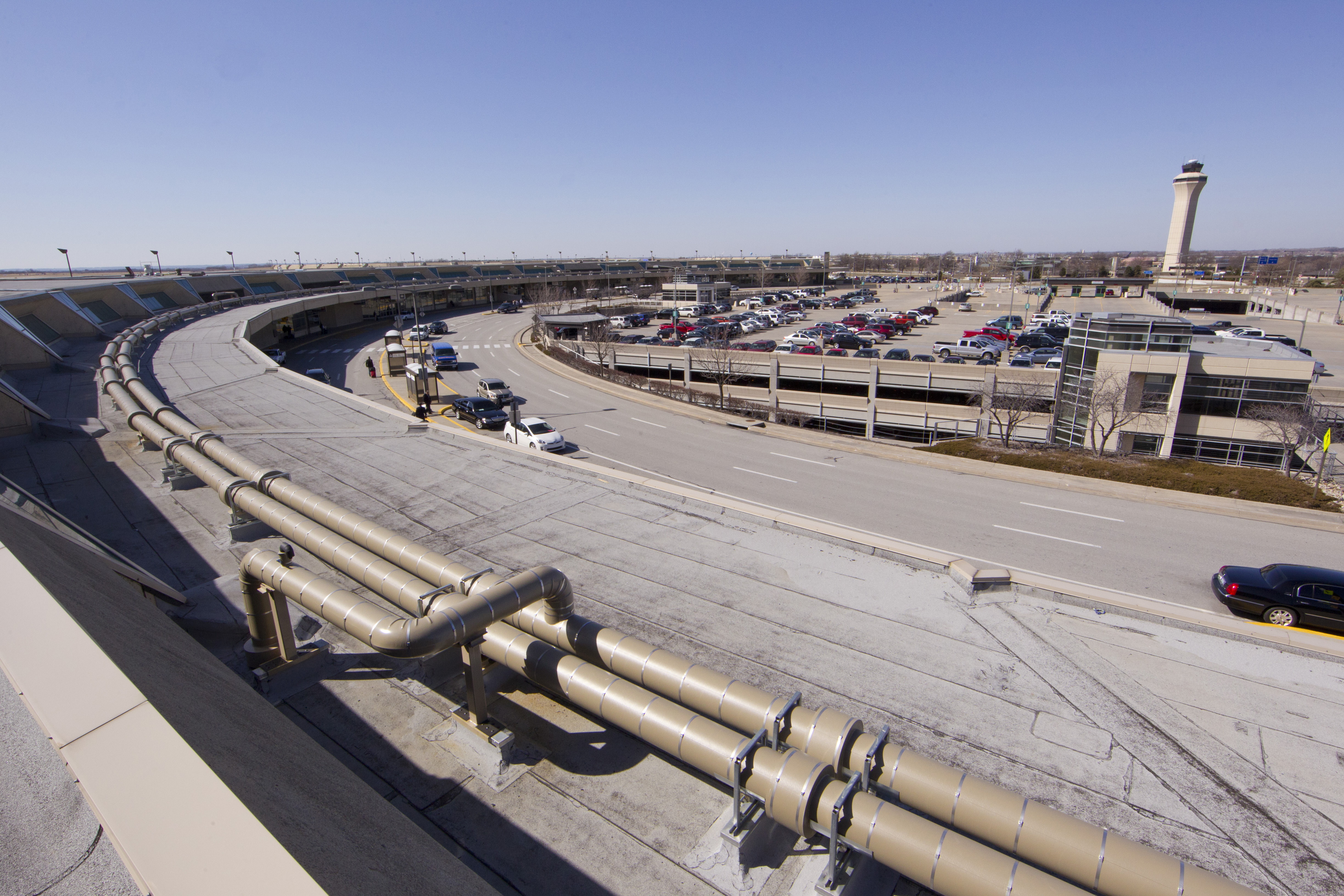 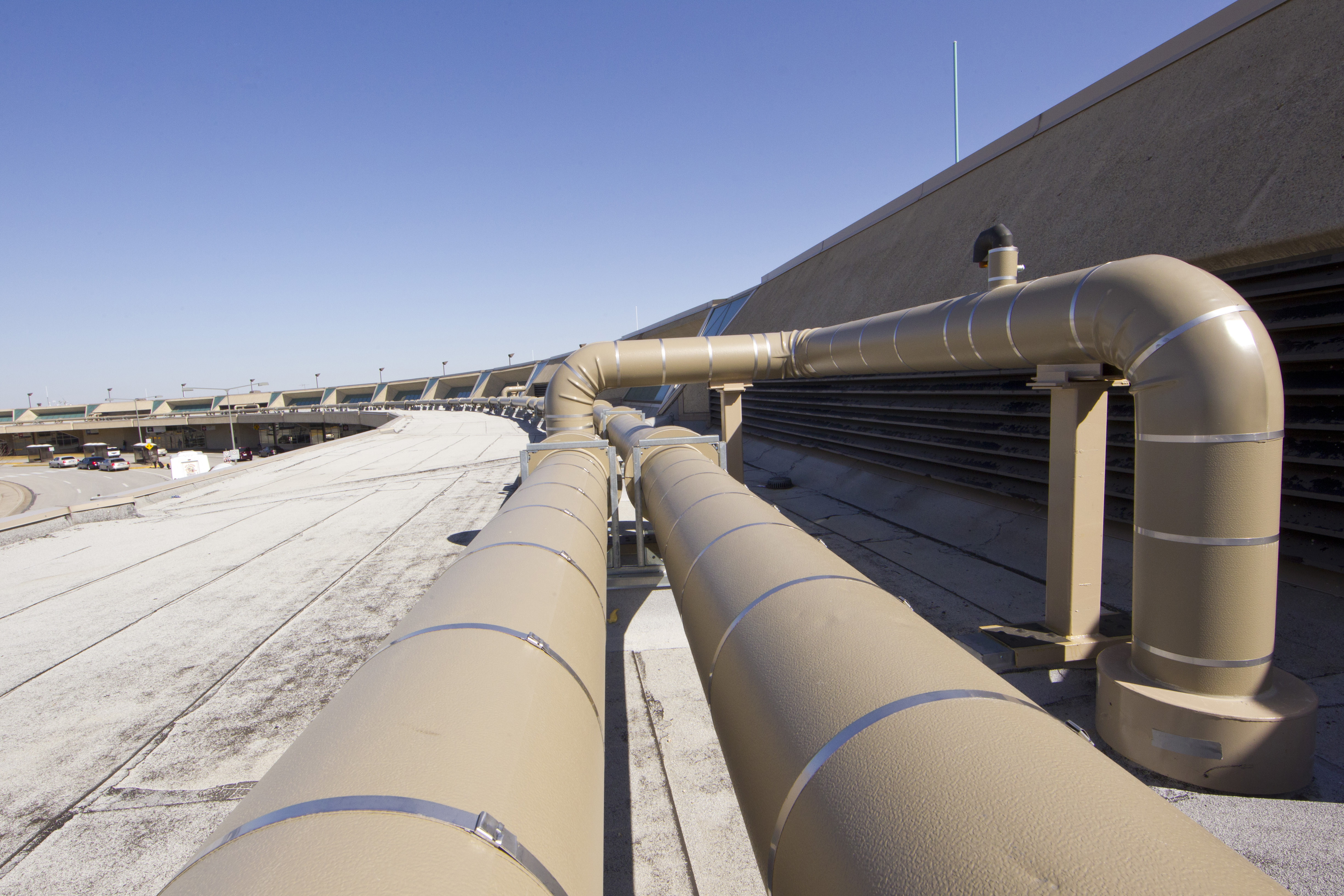 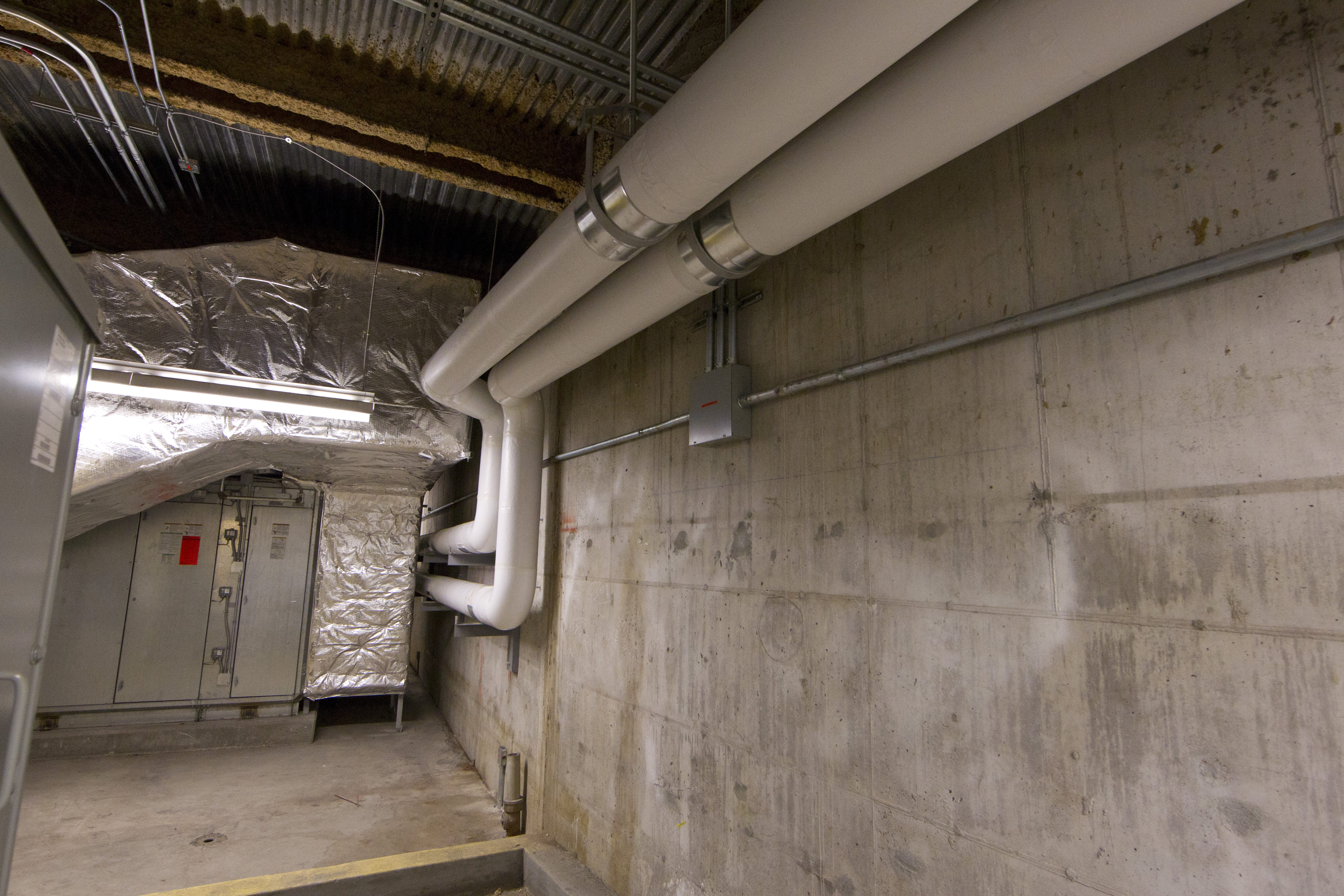 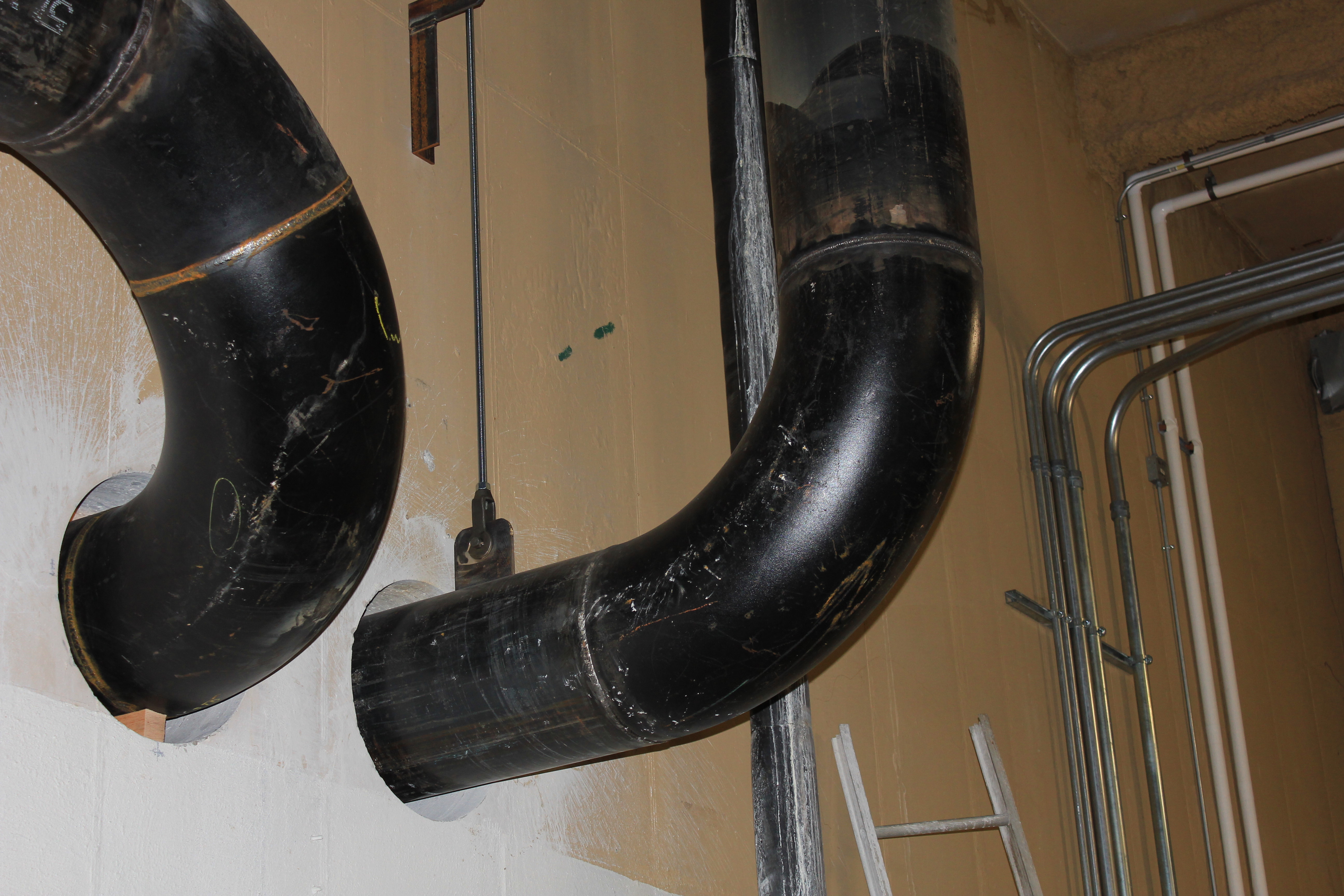 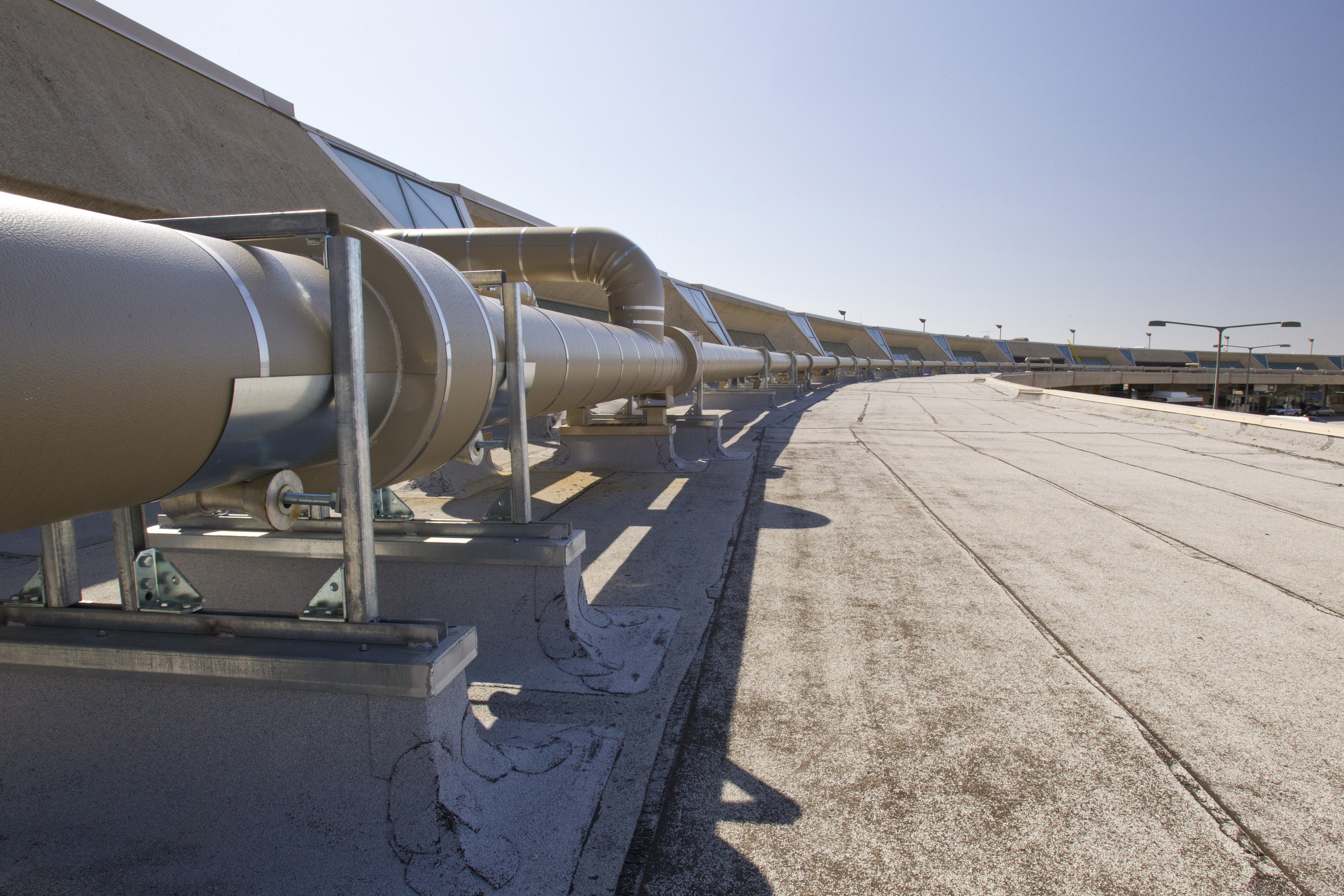 This project encompassed the replacement of the underground and above ground distribution lines for the chilled water system, which supported the air conditioning in the terminals.

The scope of the underground portion of the project was to replace part of the existing piping with new materials.  The remaining existing piping was refitted with cured-in-place piping (CIPP) to eliminate the leaks. The new route for the piping was to leave the building aboveground for approximately 75 feet and then dropping below the surface to complete the new underground portion of the installation.  Numerous interferences with telecom lines, fiber and cable, as well as jet fuel lines required a large number of adjustments to the piping.

The above ground portion of the piping proved to be a very challenging installation as well.  The previous distribution system featured a buried reverse/return loop in front of each of the circular terminals to move chilled water to and from the mechanical rooms. Approximately 15,000 linear feet of aboveground roof-supported piping was fabricated and installed to replace this system. The layout of the new piping had to follow the circular form of the roof as well as connect to the lower level mechanical rooms of the respective terminals.

Pipe supports were located on major structural beams to avoid interference with the structural expansion joints, and access points were identified to drop the piping through the roof into the terminals' mechanical rooms. The project included two-inch thick insulation to protect pipes against freezing temperatures. Aluminum metal jackets that color-matched the existing soffits along the roof were added to prevent the new piping from compromising the aesthetic integrity of the terminal buildings.

The piping ranged from 8 to 12 inches in diameter, and over 900 roof supports were fabricated onsite. The piping was welded together using mitered joints to follow the curvature of the roof.

The Owner’s primary challenge with this project scope was how to replace the lines without significantly disturbing airport operations.  Although the underground portion of the installation ran the shortest distance, it proved to be the most complicated part of the project. The existing line routing from the chillers extended through the central utility plant wall as two 24-inch pipes, then split into 12-inch and 16-inch pipes just outside the wall. Two concrete-encased telephone duct banks lay on top of the piping.

The project required completion by April, so the airport would have air conditioning when spring weather arrived in Kansas City. The existing underground drawings were not 100 percent accurate so camera work determined the location of the piping bends and allowed the determination that host piping was structurally sound for CIPP installation. The roof work required careful coordination between Rand’s field staff, fabrication shop and crane operators.  Driving lanes had to be closed, which affected passenger drop-off points and required close cooperation and coordination with the Owner.